Following financial and scientific support from the Europe and the USA, the Government of the United Republic of Tanzania has yesterday announced its intention to protect a globally unique forest ecosystem in East Africa, through creation of the 26 km2 (6,463 acre) Magombera Nature Reserve. 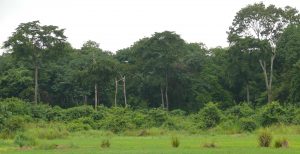 Since the 1970s, conservationists have been campaigning for the protection of Magombera Forest in Tanzania, which research showed would disappear by 2018. Local villagers had asked conservationists for their help in communicating the importance of the forest. The forest was given hope in 2007 by Flamingo Land, a UK theme park and conservation zoo, through establishment of the Udzungwa Forest Project (UFP) in partnership with the Tanzania Forest Conservation Group (TFCG) and University of York. UFP aims to protect forest, help local communities, and conduct research into the unique wildlife and people of the region.

However, without formal protection, the forest continued to be threatened, through illegal activities including tree-cutting for charcoal and poaching of elephants and other animals.

This year, UFP and TFCG have reached their target of close to US $1 million to protect the forest thanks initially to funds for establishing a new land lease, from World Land Trust, Rainforest Trust and Aage V. Jensen Charity Foundation, kick-started by a new donation from Flamingo Land. Additional funds from Rainforest Trust are also now being used by UFP and TFCG to develop and implement a conservation management plan for the new reserve. 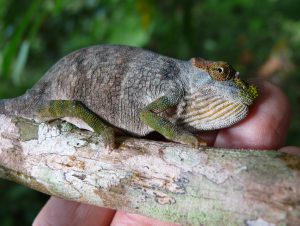 The conservation value of Magombera Forest first became known in the 1970s, but received international news attention through the scientific discovery of a new chameleon species literally in the jaws of a snake (www.theguardian.com/world/2009/nov/23/new-chameleon-species-magombera-tanzania). This Magombera chameleon, Kinyongia magomberae, was a major incentive for increased donor support and interest in protection of the forest, along with Endangered  populations of Udzungwa red colobus monkeys, Verdcourt’s Polyalthia tree and the large-leaved Memecylon tree. In addition, the Endangered Luke’s Cynometra tree occurs mainly in riparian gallery forests on the Kilombero Sugar Company land to be added to the new nature reserve. Numerous other internationally threatened species of plants and animals are present on the combined reserve lands, including Udzungwa dwarf galago, African elephants, and hippopotamus.

Moreover, the Magombera Forest is also a vitally important place for local communities who depend on the adjacent land for rice and sugar farming. Without the invaluable ecological services provided by the adjacent forest, this important agricultural region would be under serious threat from floods and soil erosion.

The Magombera Nature Reserve (or formally “Magombera Nature Forest Reserve”), will initially be managed by UFP and TFCG, and will break boundaries in forest conservation in Tanzania, by ensuring that tourist entrance fees will go both to local communities and to the government managing authority. Due to decades of human presence without harm to the monkeys (they are not hunted due to local taboos), most tourists visiting Magombera Nature Reserve will have a unique opportunity for close encounters with colobus monkeys, after just a short walk through flat, shaded, breathtaking forest.

Anyone wishing to help the wildlife and people of Magombera can do so by visiting the new Nature Reserve – contact Wild Things Safaris, www.wildthingsafaris.com.

Project leader, Dr. Andy Marshall, from the University of York, University of the Sunshine Coast (Australia) and Flamingo Land, said, “This wonderful news has followed more than 40 years of research and consultation. When I first began work in the forest 15 years ago it was clearly a biologically important place, but it rang with the sound of axes and machetes. Over the past few years UFP has worked with local villages to find alternative sources for wood and has reduced the frequency of wildfires, invasive vines and tree-cutting, leading to thousands of small trees now growing back into the once empty forest understorey.”

Charles Meshack, Executive Director of managing partner, TFCG, said, “This is a major achievement for forest conservation that will help both wildlife and people, in a way that differs from any other reserve that I know.”

Gordon Gibb, Flamingo Land’s owner said, “This is the culmination of my life’s work and passion and that of the company, Flamingo Land”.

Udzungwa Forest Project is a conservation project based in southern Tanzania. The aim of the project is to better protect tropical forests through ecological monitoring, community education, capacity building and lobbying. UFP was established and is led by Flamingo Land, operating under the Tanzania Forest Conservation Group and Reforest Africa. UFP works in partnership with the University of York, local villages and the Tanzania Forestry Service. www.reforestafrica.com/projects.

Tanzania Forest Conservation Group is the largest national, environmental, non-governmental organisation in Tanzania. For 34 years, the mission of TFCG has been to conserve and restore the biodiversity of globally important forests in Tanzania for the benefit of the present and future generations. TFCG achieves this through capacity building, advocacy, research, community development and protected area management, in ways that are sustainable and foster participation, co-operation and partnership. www.tfcg.org.

Flamingo Land Theme Park and Zoo is one of the UK’s most visited tourist attractions, with 1.7 million annual visitors. The company has a long-term commitment to wildlife conservation and has donated over $700,000 to its work in Magombera Forest. Its research and conservation collaboration with the University of York has received six awards. www.flamingoland.co.uk.

Rainforest Trust is a leading international conservation organization that has been steadfast in its mission for 30 years to save endangered species through the purchase and protection of imperilled tropical habitats in partnership with local partners and communities. Since its founding in 1988, Rainforest Trust has helped protect over 18 million acres of rainforest and other tropical habitats in more than 125 project sites around the world. Presently, Rainforest Trust is working to establish a network of over 190 protected areas toward its goal of strategically protecting 50 million acres by 2020. Rainforest Trust has a 4-star rating from Charity Navigator, and 100 percent of project gifts directly fund vital conservation action. www.RainforestTrust.org.

World Land Trust is an international conservation charity that protects the world’s most biologically significant and threatened habitats acre by acre. Through a network of partner organisations around the world, WLT funds the creation of reserves and provides permanent protection for habitats and wildlife. Partnerships are developed with established and highly respected local organisations who engage support and commitment among the local community. www.worldlandtrust.org.

University of York is one of the world’s leading universities and a member of the elite Russell Group of universities. The university is a dynamic, research-intensive university committed to the development of life-saving discoveries and new technologies to tackle some of the most pressing global challenges. www.york.ac.uk.

Aage V. Jensen Charity Foundation operates all over the world via ownership as well as support of research and nature projects. The objective of the Foundation is to contribute to the preservation of nature in all its diversity. Through the acquisition of conservation areas, and through the participation in projects. www.avjf.dk.

Tanzania Forest Services Agency is a government agency within the Ministry of Natural Resources and Tourism of the Government of the United Republic of Tanzania. The mission of TFS is to sustainably manage the national forest and bee resources in order to contribute to the social, economic, ecological and cultural needs of present and future generations. The Tanzania Government through the Ministry of Natural Resources and Tourism is acknowledged for working hand in hand with the consortium to ensure the area is finally protected. www.tfs.go.tz.